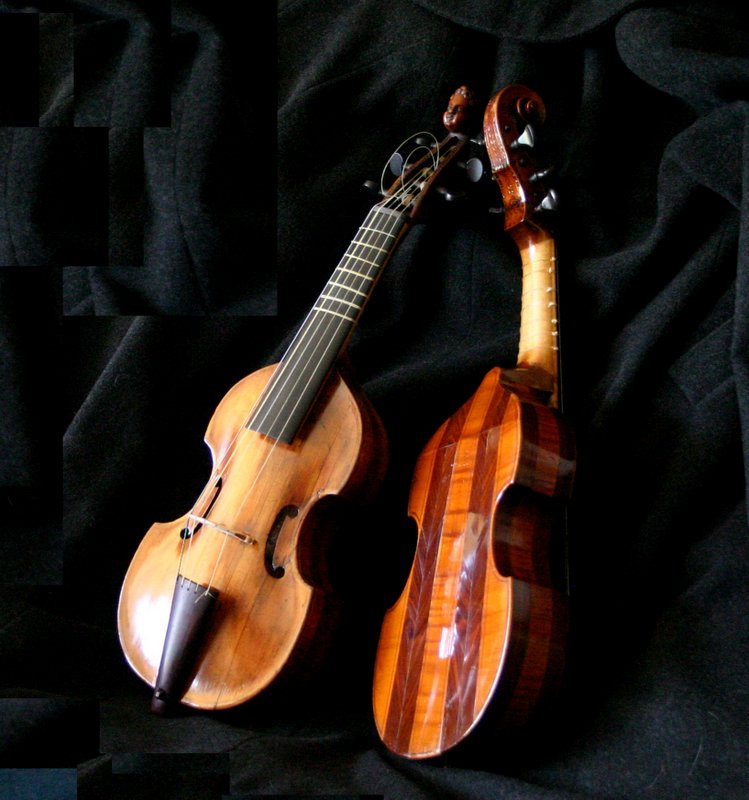 The tiny pardessus de viole, either in viol or quinton form, were very fashionable in the French aristocratic circles between 1730-70. They were favored by women, some of them who excelled as performers, such as the legendary Mlle. Levi, who delighted all Paris at the Concert Spirituel in 1745.

Those two instruments are representative of the French 18th century fine crafmanship: a five-string pardessus made in 1755 by Louis Guersan (one of the most famous makers of the time) and an extrarodinary and wonderfully made 6 string pardessus,  portrayed (before its restoration) and documented in Sylvette Milliot's La Lutherie Parisienne au XVIIIeme (Brussels: Les Amis de la Musique, 1997, pgs. 279-280) as an example of the French 18th century school of lutherie. Both of them have heads carved by the great LaFille.

A series of photos of the two instruments can be found at
https://get.google.com/albumarchive/113249047994842863568/album/AF1QipOzXn3U9mDAtbWNRbeumYZpwIU-IlXDu2nxW6yq?source=pwa 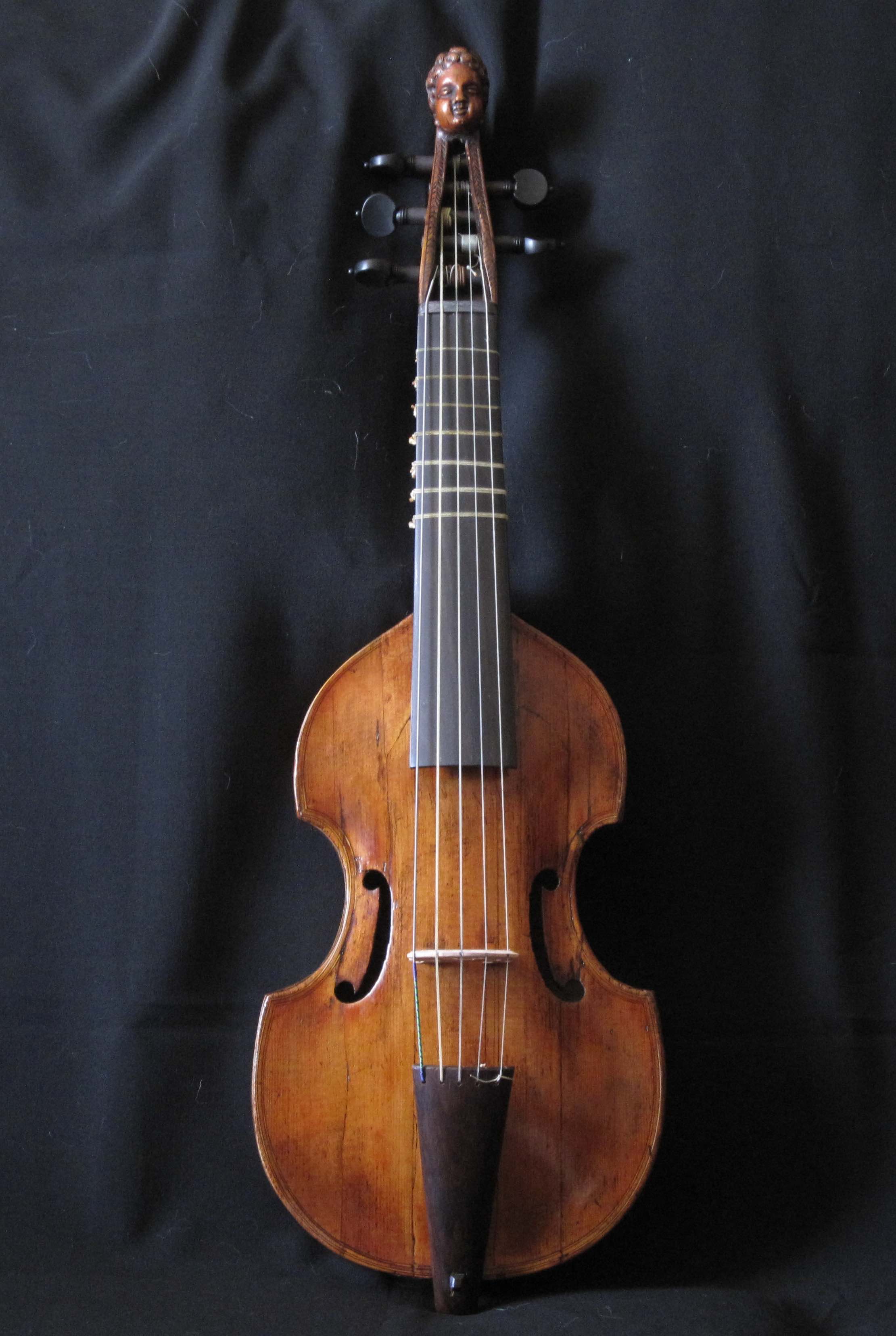 The body widths measurements are taken through the back, and give the maximum upper and lower widths.

According to Tom MacCracken viol database, the previous owner of this instrument was none other than Thurston Dart, the well-known English musicologist and harpsichordist (who also played viol, though in private settings, only with friends and students, not in public). Although he died in 1971, his estate continued to own his antique viols for many years thereafter, until they were finally sold. 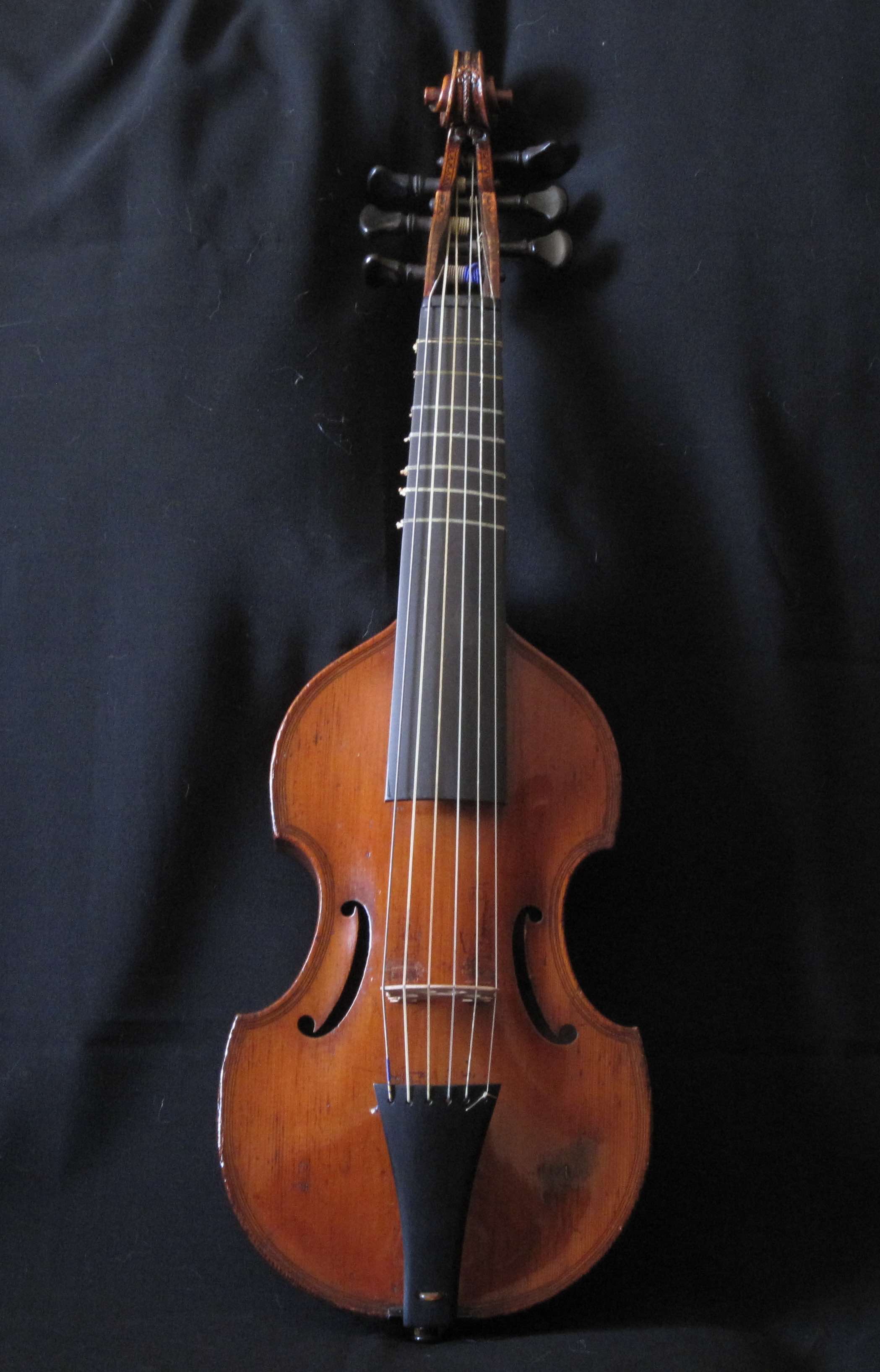 The body widths measurements are taken through the back, and give the maximum upper and lower widths.

According to Tom MacCracken, in personal correspondence, there is no known maker that even comes close to matching the one of this pardessus, which has a number of unusual features:
- The striped back and ribs are made in reverse colors from what Guersan and others normally did, in other words with the back being light-dark-light-dark-light and the ribs dark-light-dark.
- The dark stripes on the back are made of two pieces of wood, resulting in a V-shaped wood grain, which I believe is completely unique, as is the presence of purfling outlining each of the light-colored stripes on the back.
- The use of double purfling on the front is not so unusual: in fact, Fleury also did this, along with Guersan, Ouvrard, and a few others; however, in most other ways this instrument doesn’t look like theirs.
- The C-holes are narrower than those on almost all other small French viols.
- The body outline has rather open corners, especially the upper ones.

This instrument has an interesting story: Joseph Feldman, the violin collector who lived in Rio de Janeiro, Brasil, was in Paris in the late fourties.  Searching for instruments, he was contacted by the widow of the recently deceased concertmaster of a French orchestra. She offered to sell him her husband's violin, at a very low price. After examaining the instrument, Feldman told her that it was worth much more than she was asking, and that he had not means to purchase it. But he knew who would be interested and would be able to pay for it a fair price, its true value. She followed his instructions and sold the violin, to her great satisfaction, to the person indicated by Feldman. As a token of her gratitude, she gave him the six string pardessus. Feldman kept the pardessus in his collection, and in 1971, offered it as a gift to his future daughter-in-law, Myrna Herzog, who has kept it and played it since then, 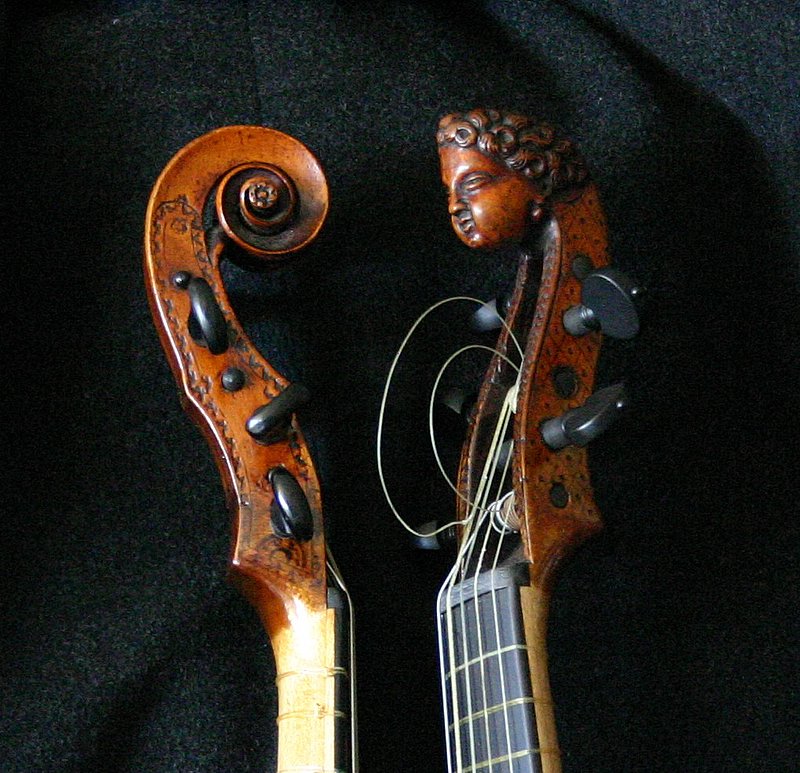 In early 1998 Myrna Herzog took the Guersan 5 strings pardessus and the six string pardessus to expert Fred Lindeman in Amsterdam, to be restored.

Fred Lindeman was a world respected restorer (the one who restored the Met’s Strad to baroque condition), then at the height of his career. His recent passing away has been commented by the Strad: (http://www.thestrad.com/dutch-luthier-frederick-lindeman-died-aged-84/)

On January 10 Lindeman wrote : "next time that I will make a trip to Paris, I will include an appointment for a visit to the museum there and get the necessary information for the neck etc. of the pardessus.”

On 23.9.98 Lindeman wrote that he went to the Paris Museum, but had no success in examining actual instruments. He was given all their files, and complained that it was a “documentation of miserable poorness and not containing at all some useful information”.

On 02.12.98 he writes about his new trip to Paris, where this time he was successful: he was able to examine “four original pardessus in absolutely original condition” and says that he got “every measurement I wanted to have for the future restoration of both your instruments. I could examine two 5-string pardessus by Guersan, almost similar in sizes of the body, but somewhat different in widths of the fingerboard and lengths of the pegbox and head. The 6-string instrument by Ouvrard, same body sizes as both Gersan’s, almost the same sizes of the stop (diapason) etc., only a somewhat wider fingerboard and slightly thicker neck, lead me to the supposition that in fact those makers made just one and the same instrument for 5 or 6 strings and only put one string more on it, depending on the wish of the client. However this might have been, I am sure that I have got enough information to do the jobs [i.e. the restoration of the two pardessus] ”.

Lindeman also describes how the person who assisted him, Anne Houssay, “saw my prepared sketches of a pardessus to be filled-in with measurements and asked me to have them copied after being completed. In this way she should have something to be put into the almost empty files about the instruments”.  In other words, anyone who has addressed the Paris Museum regarding those pardessus in the last 20 years, has received  information derived from Lindeman’s notes.

The 1755 Guersan had internal body restoration to be made. The six-string pardessus body was intact, but its neck had been changed, in a conversion to a viola d’amore with sympathetic strings, and its peg-box had been shortened. Lindeman restored the body of the Guersan, and for the six-string he made a new neck, lengthened the pegbox and fitted a new fingerboard, tailpiece and bridge.

Lindeman’s restoration of the two pardessus was completed in 2000.