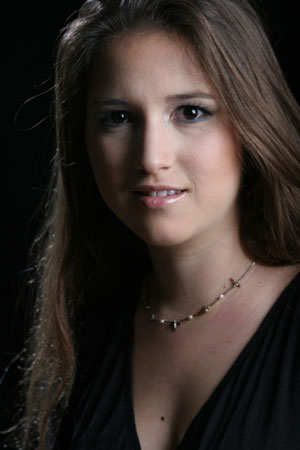 Einat was born in Israel. She served as an Excellent Musician at the IDF.
As a soloist Einat has performed in several roles with the Israeli Opera including Orit in The Little Magic Flute (Mozart), the Shepard Boy in Tosca (Puccini), Hansel in Hansel und Gretel (Humperdinck), the child in Half a Moon Tale (Michael Shenhav) – a role which was created especially for her, and knabe in Die Zauberflote (Mozart). She also performed Bastienne in Bastien und Bastienne (Mozart) in an Israeli Opera production within the Magical Sounds series. Einat has also performed as soloist in numerous Israeli Opera concerts all over Israel.

Einat has performed as a soloist with several local orchestras including the Israel Philharmonic Orchestra, the Haifa Symphony Orchestra, the Israel Symphony Orchestra "Rishon LeZion", the Jerusalem Symphony Orchestra, the Israel Chamber Orchestra among others in a wide repertoire including the solo part in the Andrew Lloyd Webber Requiem, The "Zbigniew Preisner" Requiem and the Requiem by Faure. She performed with conductors such as Maestro Zubin Mehta, Dan Ettinger, Yishai Steckler, David Sebba, Stanley Sperber, Mendi Rodan, Gabor Hollerung, Eitan Globerson, Ori Leshman, Malcolm Singer, Doron Salomon and others. She performed in several concerts with Prof. Arie Vardi.
At the "Cameri" Theatre she performed the role of the Girl in A Rat Laughs (Ella Sheriff), as the young child in Badenheim 1939 and as the daughter of Alexander Penn in Was it a Dream.

Last year she sang in two opera productions at the Israeli opera: “the Child Dreams” (Gil Shohat), conductor: David Stern, and the roll Hadara in the opera “Flying Lessons” (Ella Milch-Sheriff), production of the New Israeli Opera and the Cameri Theatre in Tel-Aviv.

Einat is currently studying at the Buchmann-Mehta School of Music, Tel-Aviv University in the class of Efrat Ben-Nun. Recently she won the first prize in the school’s vocal competition. She received the America-Israel Cultural Foundation scholarship for 2008-2011.

A few months ago, Einat sang with the Israeli Philharmonic Orchestra and the Buchmann-Mehta School of Music Symphony Orchestra in a Gala Concert conducted by Maestro Zubin Mehta, and also sang the role of Valencienne in Die lustige Witwe (Lehár) with the opera ensemble of the school.

Einat is a member of Voce PHOENIX.