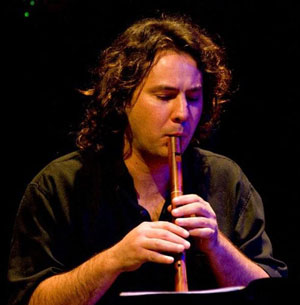 Adi Silberberg is a multi colored creative & performing artist. In addition to music, his activities include writing, painting, photographing , editing, etc. As can be expected, in music Silberberg's activities are equally varied, from improvising to composing, from teaching to performing, from pop music to Renaissance & Baroque with period instruments & from electronic keyboard to viola da gamba. He is mostly known as a professional recorder player – valued for his special agile way of doing that.

Silberberg began his musical life in his home town Rehovot, where he studied the recorder and the violin under Gershon Prensky – a lasting influence in his musical career, with whom he grew to his adulthood, winning contests of the America-Israel Foundation, & performing as a soloist of Vivaldi's concert in C for sopranino recorder at a series of concerts with the Ramat Hasharon Camerata. During that time Adi continued encountering different musical instruments & styles both with teachers & by himself – a habit he kept during his life.

Silberberg attended many of the Jerusalem Early Music Workshops, where he worked with some of the leading figures of Europe's early music scene. After one year of intensive musicology studies in Bar Ilan University in a rather personally adapted schedule, Adi went off to Utrecht, Holland & attended the conservatory of the High School of Arts, as a recorder student under the guidance of Leo Mieling & Heiko ter Sechechet. He completed his studies there after two years (instead of four) & returned to Israel. During his time in Holland, & encouraged by the institution atmosphere & teachers, Adi started taking composition more seriously & his pieces have been performed by students there & also abroad in their homeland countries then as well as after his return to Israel.