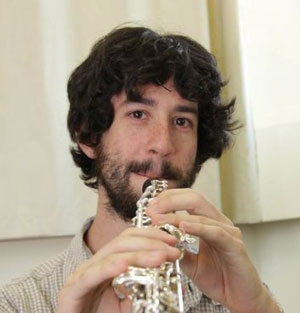 Born in 1986, Raphael began studying recorder playing at the Arad Conservatory at the age of 7. At 13, he began oboe studies with Yoel Lifshitz. He continued his music studies at the Israel Arts and Sciences Academy in Jerusalem, from which he graduated in 2004.

Raphael served in the IDF as a combat soldier, and later as an assistant to an adjutant officer. During his army service, after a two year break from music, Raphael began oboe studies with Dudu Carmel, with whom he still studies nowadays through the Jerusalem Academy of Music and Dance. In the academy, Raphael performs regularly as principal oboist for the Jerusalem Academy Symphony Orchestra and is a member of the Academy's representative woodwind quintet.

Raphael has participated in masterclasses with oboists Nicholas Daniel, Nick Deutsch and Peter Veale. He has participated twice in Tzlil Meudcan summer course and festival for contemporary music. As part of these, Raphael has given Israeli premiere performances of pieces by Nicolaus Huber (Vor und Zurück) and Elliot Carter (Oboe Quartet).

In addition to oboe and recorder playing, Rafi has studied composition and orchestration with composers Michael Wolpe, Andre Hajdu, Israel Sharon and Ayal Adler, and has participated in composition masterclasses with composers Chaya Czernowin and Steven Takasugi.

Raphael has been awarded scholarships from the Arad conservatory, The Jerusalem Academy and the America-Israel Cultural Foundation.