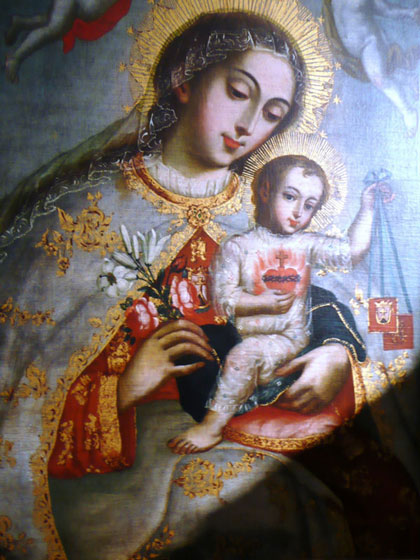 Magic music with engaging rhythms, from the Cathedrals and the Jesuit Missions, from Indians, Blacks, Spaniards and Criollos.

The program starts with a processional hymn in Quechua, sings the pilgrim Sun and the black confraternity of the Star, goes through a Mass for the indians at the Jesuit Missions by Juan de Araujo, proceeds with Peruvian folk songs from the 18th century.

After a moving Salve Regina by Cascante and a breathtaking Magnificat by Torrejon y Velazco, the program reaches its end with a musical representation of a bull fight by Diego José de Salazar.

"It was in this infectiously exuberant spirit and meticulously polished rendition that this intriguing repertoire was presented". Ury Eppstein, The Jerusalem Post

"Brazilian-born Myrna Herzog has introduced Israeli audiences to various kinds of South American music, to its flavors, its instruments and to its all-out exuberance. “Sun and Stars” was stirring and a moving kaleidoscope of choral, instrumental and solo textures... bringing together a host of good artists in a fine performance." Pamela Hickman, Israeli Music Scene

"A concert of music from Peru was just performed at the Abu Gosh Festival by Ensemble PHOENIX, soloists and the Jerusalem Oratorio Choir, all conducted by Myrna Herzog . Whoever was not there in the hall, missed out! " Yaacov Ahimeir, Roim Olam

"Dear Myrna, Once again, for the most wonderful musical experience. Thanks to you and your musicians I am now able to further understand the music in my own country. All the best to all of you." The Peruvian ambassador, José Luis Salinas Montes

"I loved your Peruvian Baroque concert in Abu Gosh and applauded so vigorously I could barely move afterwards. It was unforgettably beautiful and joyous." Betsy Rosenberg, writer/translator/editor