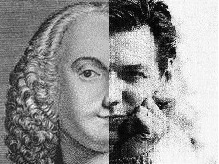 What would have happened if Antonio Vivaldi would have met Antonio Carlos Jobim in a time travel visit to Brazil? Brazilian conductor Myrna Herzog, a personal friend of the late Jobim, "arranges" such magic meeting between the two composers, flying on the wings of her PHOENIX ensemble.

The colourful program brings some of the best music by the two composers who marked the world with their genius: some of Jobim's most beautiful songs dressed in the new sound of old instruments, and some of Vivaldi's hits transformed under Brazilian influence.