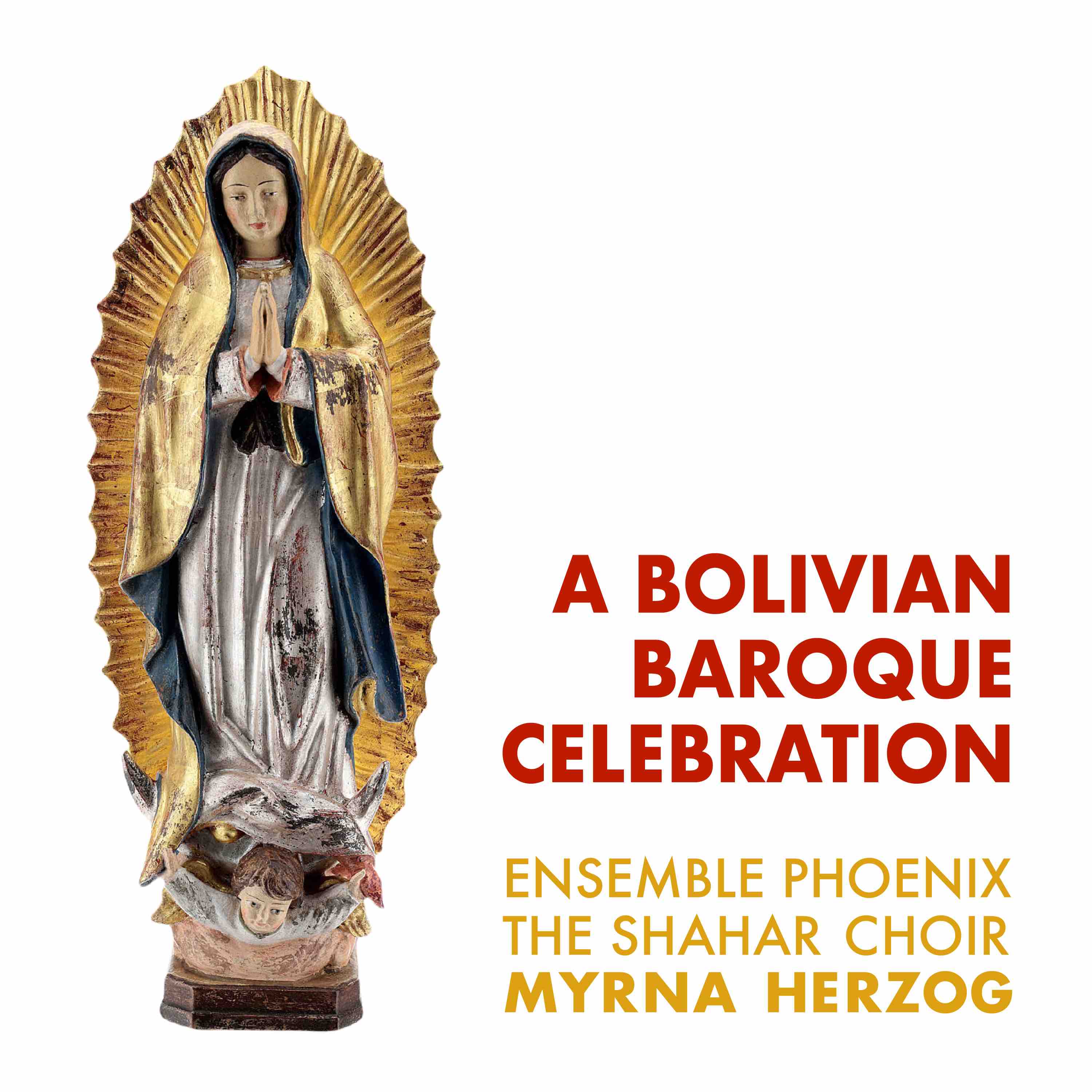 A concert of BAROQUE FESTIVE MUSIC FOR GUADALUPE from La Plata, Bolivia, c. 1717

This CD joins the live recordings of two outstanding concerts at the Abu Gosh Festival in October 2004 and June 2008. A Criolla Celebration evokes the resplendent mood of the feast of Our Lady of Guadalupe, in the city of La Plata (also known as Chuquisaca, present-day Sucre, Bolivia). An extraordinary festival lasting for more than a week, La Plata's Guadalupe has been the main festive event in the rich colonial city since its inception in 1601.

This program, assembled especially for PHOENIX and the Abu Gosh Festival by musicologist Bernardo Illari, brings together music for different church services with popular songs and dances that found a place in the Guadalupe festivities, music by first-line Baroque composers such as the Spaniards Torrejón y Velasco and Juan de Araujo or the native-born Roque Chavarría. They are complemented with pre-1800 traditional pieces of different provenances, so as to recapture the festival's characteristically colorful atmosphere and present an image faithful to its multicultural spirit.

There is a bit of everything, starting with a procession and a folk song, then Vespers, a Mass, a Villancico at the Epistle, more processions and hymns, and folk songs and dances (all to Maria), and then the highlight of the festivity, bull fighting. And then the afternoon Salves ending the day, and more folk songs. All this music was played at this occasion, and much more. They did not repeat necessarily every year the same thing, but all this music was written for it.

Very interestingly, Mary of Guadalupe is an Indian saint. She is not white, like the European saints, her skin has the color of Indian skin, and because of that, she was and is revered in all Spanish-speaking South America and in Mexico as well.

Also very interesting is that a bullfight (torada) is a part of the festivities. This is because the Bull (as well as dragons and snakes) symbolizes the devil. So the Virgin all the time is present in the text of the torada, as defeating the bull (dragon, snake), and "triumphing over sin". This was also the highest entertainment because, like in the coliseum, one saw blood, so a very intense commotion, and this was accepted as a rite to celebrate the Virgin.

The music is extraordinary: on the one hand for its character one may call it really a music of joy , while on the other it is extremely intricate from the rhythm standpoint, with features uncommon in European Baroque. The Indians were sophisticated in rhythm matters, a factor which influenced all the "learned" music.

For the performance, Ensemble PHOENIX uses an unusual set of instruments, typical of South American Baroque: an ensemble of double reeds, shawm (chirimía) and dulcians (bajónes), together with baroque violin, recorder, baroque guitar, theorbo, harpsichord, organ, viola da gamba and violone – all given a special flavor by meantone temperament. And a lot of percussion. Percussion was even used in Masses, as some remaining manuscripts indicate.

This is a live recording of the concerts which took place at the Yearim Church, Abu Gosh, on October 7, 2004 and June 09, 2008 .
The concert began with the choir walking in procession and singing from outside the stage.
Recording (24 bit digital): Eliahu Feldman
Editing: Myrna Herzog
Mastering: David Feldman 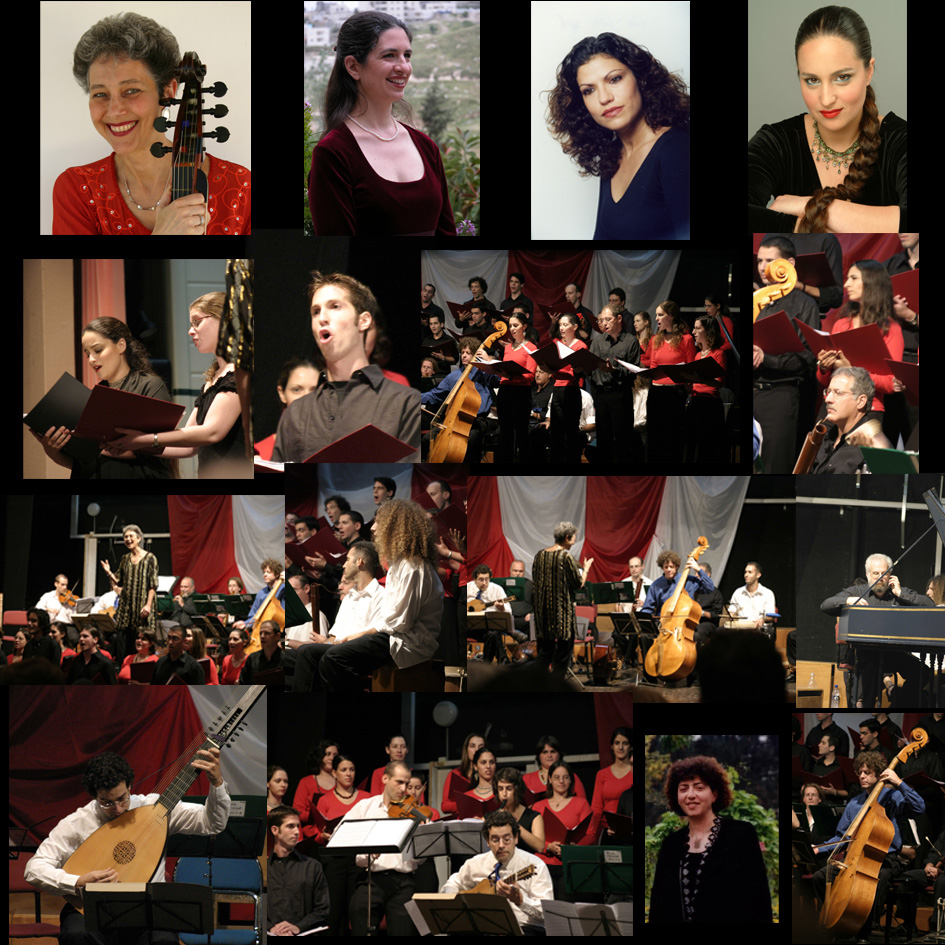 "I would like to hear again all the pieces performed". Hagai Hitron, HaAretz, Israel

"A rare opportunity to enjoy almost unknown Bolivian Baroque music of the La Plata festivities was offered by the PHOENIX Ensemble of Early Music Instruments, directed by Myrna Herzog in her dual capacity as a gambist and conductor… The instrumentalists, the Shahar Choir directed by Gilla Brill, sopranos Tehila Goldstein and Nadia Lipchek, mezzo-soprano Ady Even-Or, and tenor Dan Dunkelblum, with their enchanting and meticulously trained voices, pure intonation, and clear enunciation, captured this joie de vivre to perfection and conveyed it to an audience that couldn't help smiling throughout the performance." Ury Eppstein, The Jerusalem Post, Israel.