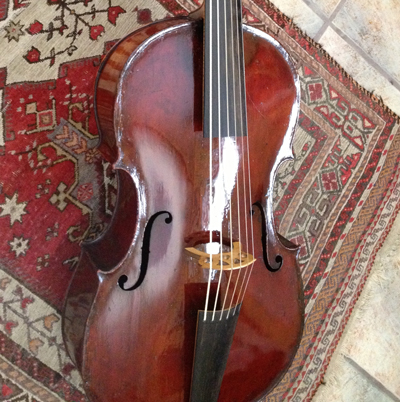 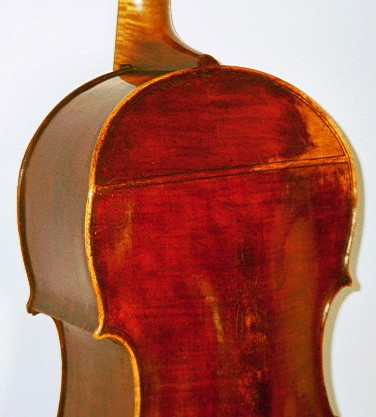 This is one of the viols made by Edward Lewis in the fashion of the Cremonese school of viol construction, i.e., displaying both an arched back and an upper cant or fold.
Makers such as the Amati went to considerable pains to insert a fold in the curved back, a fold with no practical purpose as in flat-backed viols.
Being unnecessary and impractical, it had perhaps a symbolic function, as the trademark of a viol, for this reason being often enhanced by purfling.

A study of those viols has been made by Myrna Herzog in her doctorate thesis and catalogue (vol 2. of the thesis), and especially in the article The Division Viol: an Overview, available with some of her other articles on Academia.edu.

This viol was restored by John Topham and Yuval Adereth, and since its restoration in 2001, it leads an intense concert life, played by Myrna Herzog in solo recitals in different parts of the world.
It can be heard in PHOENIX's CD "O Pray for the Peace of Jerusalem", all throughout the recording and most especially in Tobias Hume's pieces "Death"  and "Life".

Edward Lewis was one of the most distinguished British maker, and his importance has been address by Brian W. Harvey, in his book The Violin Family and its Makers in the British Isles (Oxford: 1995), : “Lewis is one of a group of distinguished English makers the absence of whose better work from any museum in Britain is a national tragedy".

Lewis I’s life has many parallels with the one of his colleague Barak Norman. They were born in the same year, 1651, worked as Church wardens in the same congregation, married in 1684 at All Hallows London Wall, and had their shops at St. Paul’s Churchyard. Lewis’ work, influenced by Maggini, “stands in high repute, though extremely rare”, its scarcity being credited by some to his business practices; by others to the exchange of labels for Italian ones, “his originals passed off as Italian.

Lewis’earliest known instrument is dated 1687, although our viol could be even earlier: dendrochronological examination performed by John Topham revealed that the youngest rings of the two-piece front date from 1662 and 1665 respectively. Since “the earliest plausible date for a labelled Norman or a Lewis would seem to be 1684, under rules of indenture”, it would be possible for this instrument to have been made in c.1685, with a wood stored for some 20 years... Certainly in dendrochronological terms it is quite a beacon along with others in my database."

The attribution of this viol to Lewis father has been made on the grounds that its dendrochronological graphs of sequences match the ones of two other viols by this maker (one of them of the same model and bearing a Lewis label), indicating that all three instruments were possibly made with wood taken from the same tree.