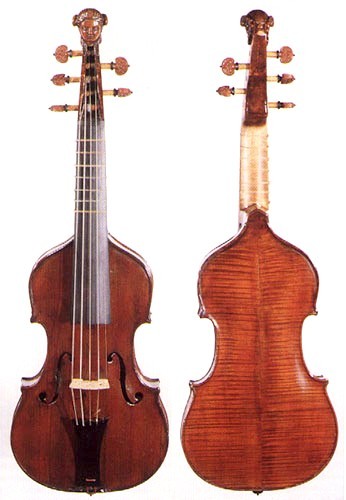 The quinton, a 5-string late French viol, tuned g-d'-a'-d"-g', was very fashionable in the aristocratic circles between 1730-70. It was performed mainly by women, the most important of which was Mlle. Levi, who delighted all Paris with her  performances at the Concert Spirituel in 1745.

The present instrument is attributed to Nicolas Augustin Chappuy, Paris c. 1760, and was restored by  Fred Lindeman of Amsterdam, who wrote about it his book The Rebirth of the Baroque Violin (Amsterdam: Gopher, 2011).

Herzog has written has Ph.D. thesis on the quinton. She has also written the “Quinton”. Entry for the The New Grove Dictionary of Music and Musicians, 2nd edition

This instrument is documented in Sylvette Milliot's La Lutherie Parisienne au XVIIIeme (Brussels: Les Amis de la Musique, 1997, pgs. 283-284) as an example of the French school of building of the 18th century. 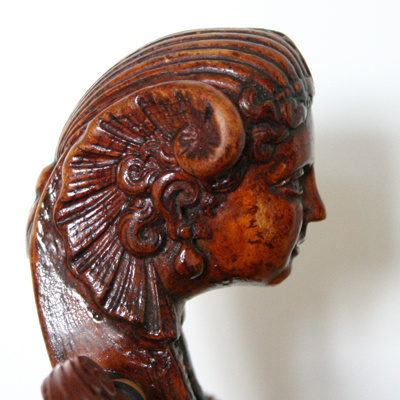 This quinton has been attributed to Nicolas Ausgustin Chappuy (c. 1730 Mirecourt-  Paris 1784).  It has the most elaborate carved head, thought to be the work of the famous La Fille. The wonderful feminine face carved might have portrayed the owner of the instrument.

According to  John Dilworth, Chappuy was trained as a luthier in Mirecourt and worked in Paris from c.1750.  He as a prolific maker, displaying a wide range of qualities characteristic of both the Mirecourt and ‘vieux Paris’ schools of building . "Like his contemporaries, he is also known for some very fine viola d’amores, quintons, and pochettes". 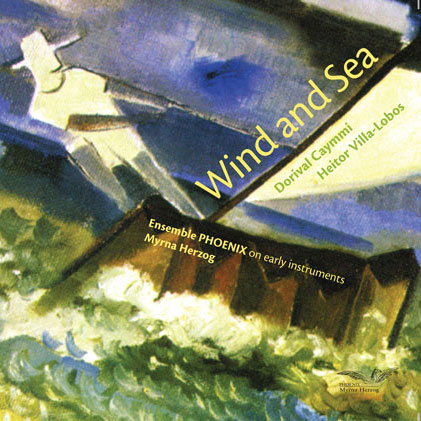 As a guest of the New York Consort of Viols, Myrna Herzog has performed with this instrument the American premiere of  a Quartet by Respighi for quinton, viola d'amore and two viols .

She has recorded with it a number of CDs, with The Jerusalem Consort and in duo with Robert Green (hurdy-gurdy).

It can be heard also  in PHOENIX's Wind and Sea.