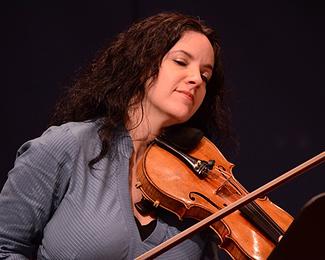 Rachel is a founder and the first violinist of the prestigious Carmel String Quartet, that has won prizes in competitions, and participated in festivals and tours  the United States, China and Europe. For eight years the quartet has a successful concert series "Over the Rainbow", winning acclaim from audiences and critics.

Rachel was born in Israel in 1977 and studied with the late Avigdor Zamir, Ora Shiran, and Yair Kless. She graduated with honors from the Tel Aviv Rubin Music Academy where she studied with Irena Svetlova and was the principal violinist of the Academy Symphony Orchestra.

Rachel won top prizes and scholarships from the America-Israel Cultural Foundation. She has performed as a soloist with Ensemble Soloists Tel Aviv, the Kibbutz Chamber Orchestra, and Barrocade. She was first violinist at the Kibbutz Chamber Orchestra, was a member of the Baroque ensemble "Bach Soloists" and studied voice with Mrs. Hadassah Ben-Haim.  She participated in festivals in Israel and abroad, including the Apple Hill Chamber Music Festival in the USA, Verbier Festival in Switzerland, the Pablo Casals Festival in France, the "Classical Winter" Festival in Jerusalem and Voice of  Music in Kfar Blum. Rachel has participated in master classes with the late Isaac Stern, Miriam Fried and Zvi Zeitlin, and with members of the Borodin, Alban Berg and Amadeus Quartets.

She is a member of PHOENIX since 2014, performing as first violinist in orchestral projects, or as a chamber musician in challenging projects such as the complete chamber music of Jean-Philippe Rameau.