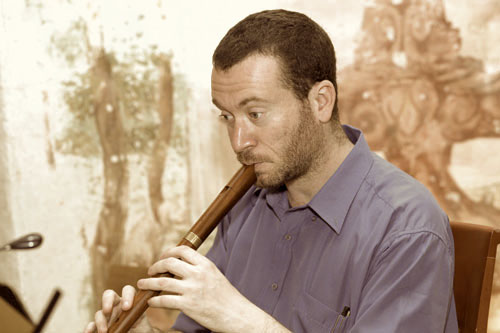 Uri Dror studied recorder with Gershon Prenski for many years, during which he took part in master-classes and workshops, both in Jerusalem and in Portugal, having lessons with Marion Verbruggen, Kees Boeke, Heiko ter Schegget, Michael Schneider, Peter Holtslag, and Sebastien Marq, and others.

Uri completed a B.Sc. in geology and worked in the IT field for three years before deciding to follow his passion for music. During the years 2001 – 2005 he completed his B.A. in performance at the Department for Early Music at the Royal Conservatory, The Hague, The Netherlands, under the guidance of Peter van Heyghen and Daniel Brüggen. In 2007 he completed his MA at the same institute; his teachers were Daniel Brüggen and Sébastien Marq.

A member of Ensemble PHOENIX, Uri is very active in chamber music, having played with leading Early Music artists in Israel. Uri teaches recorder on all levels and to all ages.