Every year a number of previously unknown composers are discovered and brought to light, but it is indeed rare to find among them a truly great composer such as Michelangelo Falvetti (1642-92). Unfortunately, of his many works (which included masses, vespers, psalms, motets) only two big oratorios survive, two jewels: Il Diluvio Universale and Il Nabucco - both premiered by PHOENIX at the Abu Gosh Festival in 2015 and 2016 respectively.

PHOENIX performance of NABUCCO at AbuGosh was the world premiere of the complete  work, which had never been presented in its entirety in modern times.

The superb Sicilian baroque six-voice oratorio is based on the Book of Daniel, and its dramatic plot brings to life the story of the three Jewish youths condemned by King Nebuchadnezzar to be thrown into a fiery furnace for refusing to worship the king's statue. The story was used by Falvetti and his librettist Giatini to convey Sicily's national struggle.

The fascinating story of Nabucco 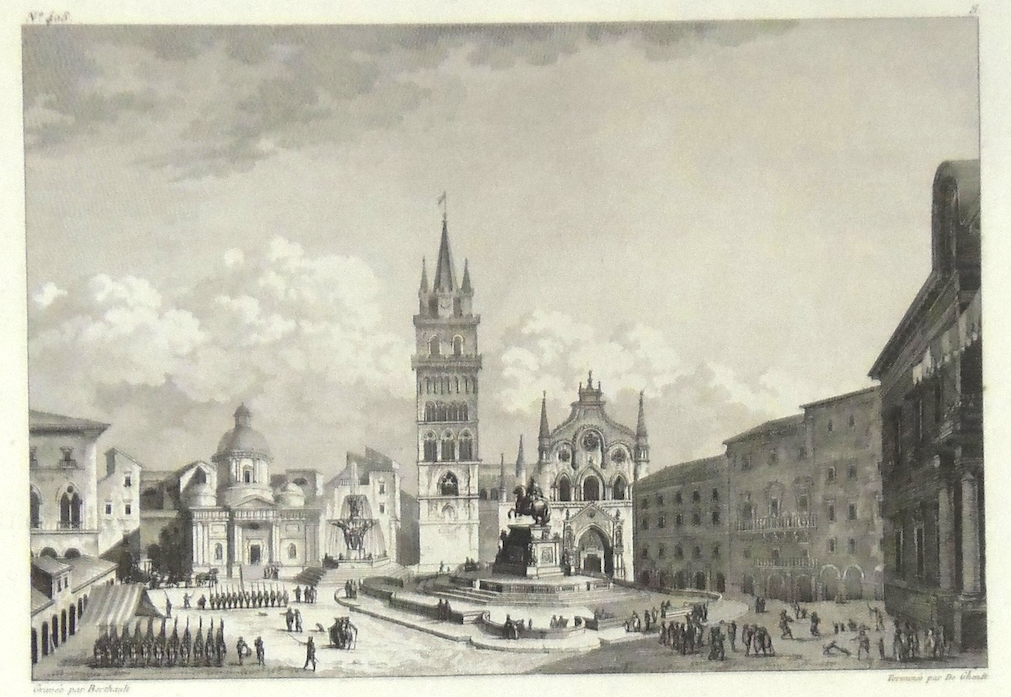 Little is known about Michelangelo Falvetti (1642–1695).  The composer was born in Melicuccà  (a tiny town in the province of Reggio Calabria) on December 29, 1642, and as many artists, went to work in Sicily, where he was considered a "great virtuoso" and occupied the prestigious post of chapel master in the cathedrals of Palermo and Messina successively.

One of the most admired librettists in Palermo at the time was Vincenzo Giattini (1630-1697), and he provided Falvetti with the librettos for Il Diluvio and Nabucco. Those were ordered by Falvetti in connection with his move to Messina in 1682, and made cut to size by Giattini with the obvious aim to reach the city’s heart. The subject of the first oratorio, Il Diluvio Universale (The Great Flood), written in the same year, could not be more suitable for a city subjected to periodic flooding.

The subject of Nabucco, written in the following year, 1683, seems also to have been carefully chosen: the defeat of arrogance and idolatry, expressed in the biblical story of three Jewish youths condemned by King Nebuchadnezzar to be thrown into a fiery furnace for refusing to worship the king’s golden statue. Giattini based his text on chapters 2 and 3 of the book of Daniel, which he merged into one, as he merged the two different statues of these chapters, the one in the king’s dream, and the other representing the king. The opposition and defiance to this single statue embodying arrogance and idolatry becomes the main subject of the plot.

Why would this be so suitable? Because, as points out Falvetti’s editor and researcher, Fabrizio Longo, with the arrival of the Spanish Viceroy Francisco Benavides to Messina after the rebellion of 1674-78, the city was deprived of ancient privileges and experienced harsh repression: in addition to summary executions, the new Viceroy “razed to the ground the Senate building, and, even more humiliating, melt the bell of the cathedral in order to erect a statue to the King of Spain, to be placed on the site of the Senate building, just opposite the cathedral... For years, the people of Messina would continue to seek the fusion [of the statue] to create a new bell of the cathedral made of the original material.”

This explains also why the text and above all, the music assigned by Falvetti to the three youths is not only defiant, but mocking. And also why Falvetti, in spite of being himself a Catholic priest, discards Giattini’s last verse about the immortality of Christ , to end Nabucco with the verse before, in a clear message: “where innocence fights, it knocks down the idols and overthrows the arrogant ones”.

Paraphrasing Goethe who said that "to have seen Italy without having seen Sicily is not to have seen Italy at all”, one could say that without hearing Sicilian music, it is impossible to have a good grasp of Italian music. The syncretism of Sicilian culture, which embraced the many civilizations which ruled successively over the isle, can certainly be felt in the music, which is unique, free, colorful, sensual. Michelangelo Falvetti is certainly a most accomplished representative of such wonderful music. 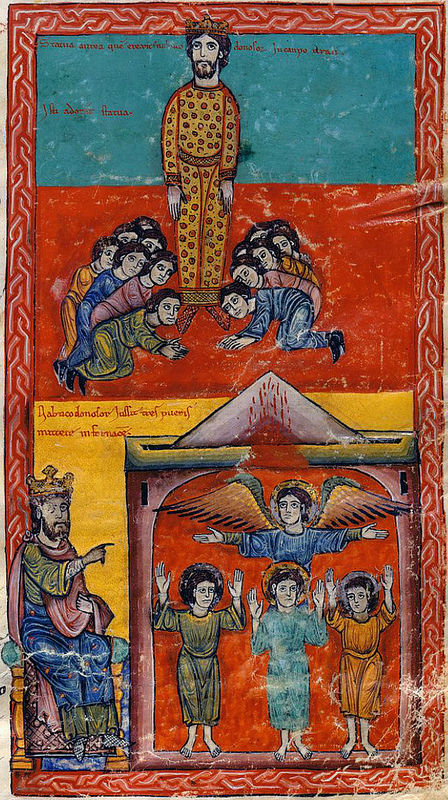 Vincenzo Giatini’s libretto of Nabucco is based on the Book of Daniel, Ch. 2-3.

The Prologue opens with the arrival to Babylon of the allegorical characters Arrogance and Idolatry, carried by the Euphrates river to conquer King Nabucco (Nebuchadnezzar).

In the first scene, Nabucco is greatly disturbed by his dreams of a statue with golden head, breast of silver and feet of clay. Fearful, he orders Arioco, leader of the Royal Army, to summon the magicians and men of wisdom of Babylon.

Scene 2 introduces Prophet Daniel, who comments the discrepancy between Nabucco’s arrogance and fears, and states that monarchs are made of dust. Together with the three Jewish youths Anania, Azaria and Misaele (Shadrach, Meshach and Abednego) Daniel sings hymns of praise to the God of Israel.

In Scene 3, Arioco announces that Nabucco is a god among deities and his statue must be adored, by royal decree. This is reiterated by Nabucco himself and by a choir who proclaims him God, while Daniel calls him a “king of dust”.

In Scene 4 the three youths laugh at Nabucco and his statue, which they refuse to adore: ”the image is of gold, the original of dust...”. The king is furious and threatens to throw them into a fiery furnace to be burned alive. In spite of Arioco’s attempts to scare and convince them, the youths continue to mock and defy the King, who finally orders them to be thrown to the flames.

In the last scene, the three youths enjoy themselves among the flames, renew their fate, and are helped by an angel, that toys with the fire. The youths escape unscathed, sing to God, and the last chorus tells us that “when innocence combats, it knocks down the idols and overthrows the arrogant ones”. 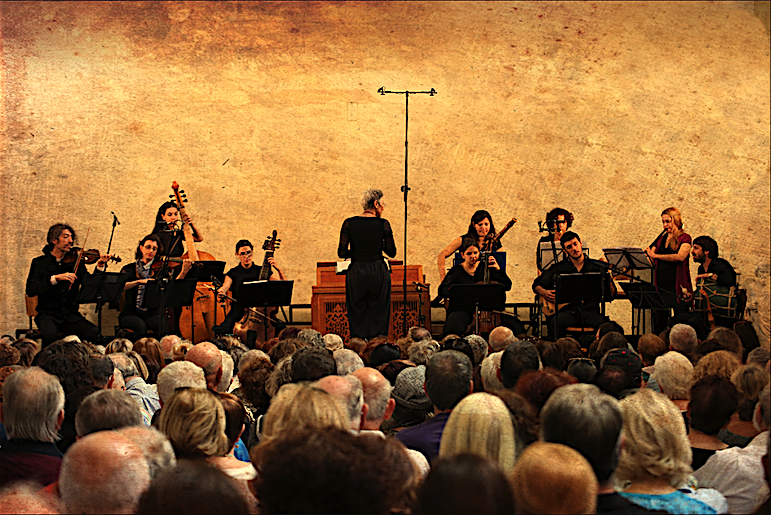 "I listened to the music only, and how was I enchanted! The two most notable features, in my opinion, in Falvetti: he had a wonderful ability to create melodies as if they grow on trees and one should only pick, and had a sense of proportion. The singing was delightful, led by Einat Aronstein and Guy Pelc. We owe thanks for the introduction to Falvetti to PHOENIX‘s musical director Myrna Herzog, who was the conductor. The pleasure bestowed by this piece of Falvetti, justifies a quote from Myrna Herzog in the program. "To paraphrase Goethe," she writes, "according to whom “to see Italy without seeing Sicily is not to have seen Italy at all”, one could say that without knowing Sicilian music, one cannot have an understanding of Italian music. Sicilian culture, which embraced the many civilizations which ruled successively over the isle, can certainly be felt in the music."  Hagai Hitron, HaAretz

"This was an auspicious, ground-breaking event in the history of performance of Italian Baroque music. Michelangelo Falvetti’s “Il Dialogo del Nabucco” is an extraordinary work, its musical canvas as rich instrumentally as it is vocally, one of both high drama and personal expression.  Myrna Herzog’s deep enquiry into the work and her exhilarating direction of it were meticulous and uplifting, resulting in Baroque performance of the highest order. Deeply moved, the audience showed its enthusiasm in lengthy applause, shouts and whistles". Pamela Hickman's Concert Critique Blog

"The reaction of the audience leaving the concert was: 'Wow!! One of the best and most interesting concerts in the history of the festival'!" Gershon Cohen, director of the Abu Gosh Festival

“Dear Myrna,
We just loved your performance of Falvetti's Nabucco, today at Haifa. So beautifully rendered, so joyous and full of hope - for not only was the music delightful but the message is just as relevant today as ever. The rich orchestral backing and the beautiful voices were enchanting. I felt great pride that most of the artists and soloists were young Israeli talent. We try to get to as many of your concerts that reach Haifa as possible. Dear Myrna - I can only wish you the continued enthusiasm, passion and well being from every point of view to keep inspiring us with your varied and exciting musical programs. Thank you!” Coral Navon 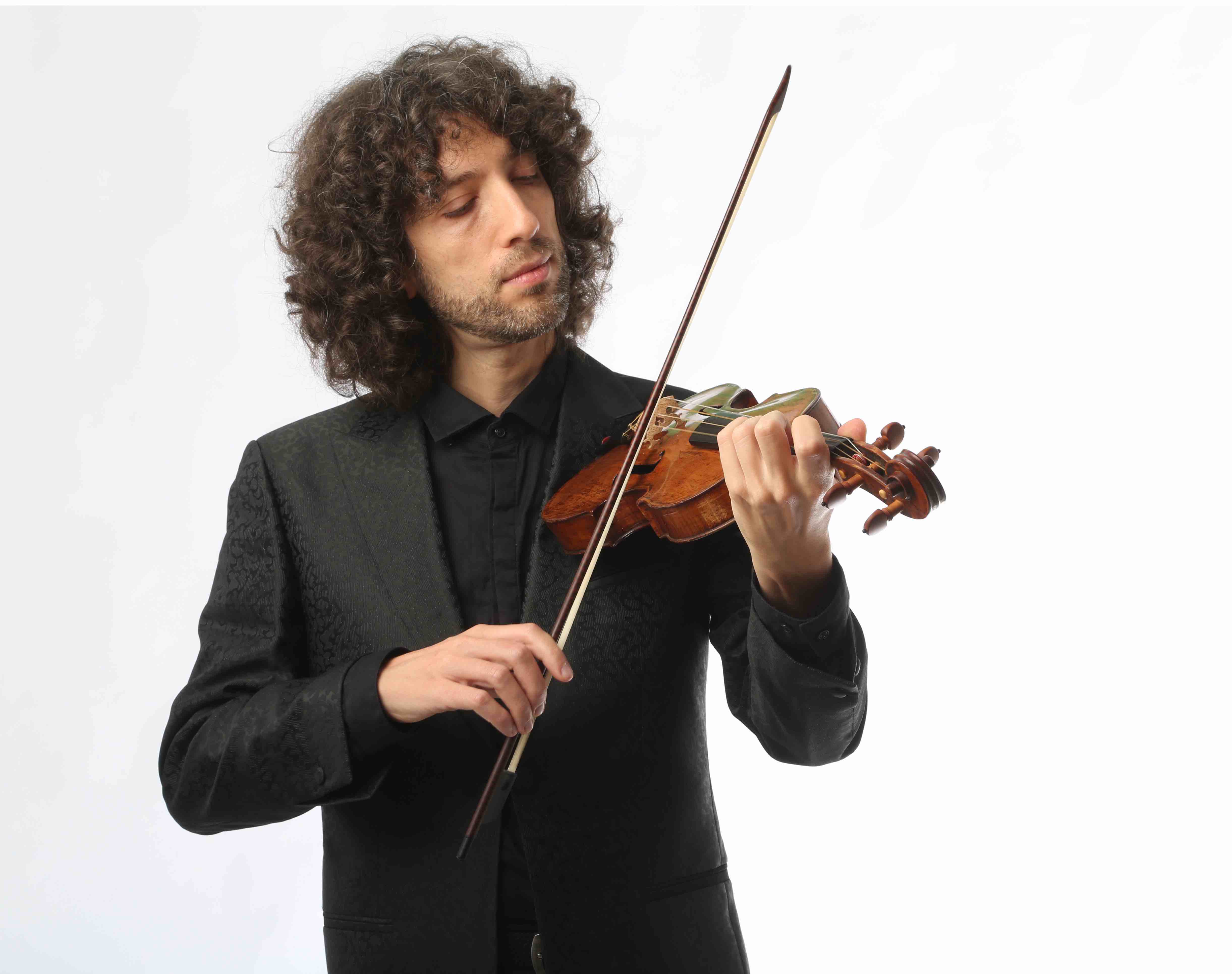 Fabrizio Longo is a musician and musicologist from Messina, and it was his reserch that brought back to life the fabulous music of Michelangelo Falvetti, his oratorios Il Diluvio Universale and Il Nabucco.

Longo studied “historically informed violin” with several famous musicians, including Luigi Rivighi, at the historical Accademia Filarmonica in Bologna.  He is one of the most experienced Italian violinists of Italian music of the ' 600 and ' 700 and in particular of the ' 600 Sicilian music. He plays a violin built by from the second half of the 18th century, attributed to an anonymous luthier from the Cremonese school, which is in it's original condition.

As a musicologist, Longo has dedicated many years to the Sicilian sources, contributing with his studies to books, in articles, particularly on Falvetti and Pandolfi Mealli and their time, but also in interpretive essays on aesthetics in the different phases of the Baroque, and also participating as speaker in congresses and conferences.  He has published academic papers, essays and critiques on 17th and 18th century music for Di Nicolò Libri, SMSP, Walhall, Ut Orpheus, Arcana, Ambronay's and Treccani, and has recorded for SMSP, Raidue, Raitre, Mediaset, MTV, Teatro di Messina, Radio Classic, Ambronay’s and Tactus.