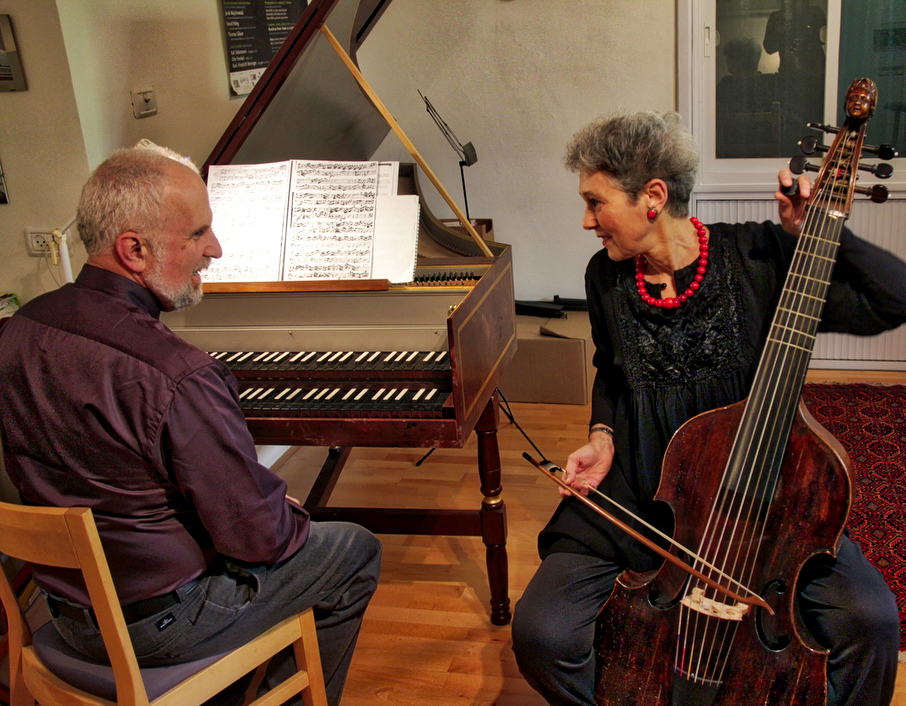 Myrna Herzog and David Shemer share with us their loving interpretation of the complete Bach sonatas for viola da gamba and harpsichord, which they have been playing together for 25 years, and which do not cease to amaze them.

Three diamonds crown the repertoire of the viola da gamba: they are the three sonatas originally composed for this instrument and harpsichord by J.S. Bach (1685-1750).
The sonatas were written between 1717 and 1723, when Bach was at the service of Prince Leopold of Anhalt-Köthen (himself a gamba player), a period which witnessed the creation of some of his most important instrumental music: the Brandenburg concerts, the Well-tempered Clavier, the sonatas and partitas for solo violin, the sonatas for violin and harpsichord, the cello suites.
The viola da gamba sonatas are in fact trio-sonatas, written in a polyphonic manner. Here, the harpsichordist is more than an equal partner: he is in charge of two of the three-parts polyphony. Such intricate writing and delicate equilibrium of forces is better heard at the original version for harpsichord and viola da gamba – for when performed on modern instruments it tends to sound like a cello solo with keyboard accompaniment, what is by no means the case.

Bach’s choice of the viola da gamba for this cycle of sonatas is consistent with his use of the instrument, thoughtfully employed in his works as an expressive tone color, often saved for special dramatic moments, as in his settings of St. John and St. Matthew's Passions. The different tonalities allocated to each sonata (each with its inherent affect according to the baroque Doctrine of Affections) contribute to their very different character, from the flamboyant jolliness of the first sonata, through the pensiveness of the second, to the deep magnificence of the third. This sonata, with its concerto-like structure and poignant adagio, may be considered the highpoint of all viol literature and closes the cycle in an extraordinary way.

It is believed that J.S. Bach wrote the viol sonatas for his friend, the viol player Christian Ferdinand Abel (1682-1761), who worked in Köthen, where his son Karl Friedrich Abel (1723 -1787) was born. Karl Friedrich later studied with Bach in Leipzig, and his association with the Bach family persisted when he moved to London, where he became a partner Johann Christian. Bach in the creation of the fashionable Bach-Abel concerts. The unaccompanied viol works presented tonight belong to a collection of pieces reportedly played for Abel’s best friends “by the fire-side”, with “a Bottle or two or good Burgundy before him, and his Viol di Gambo within his reach”, “when he took flight into fine airs, double stops and arpeggios”, and displayed “his most wonderful musical Powers”.

”The performance was rendered with facility and elegance that left no trace of the works’  technical demands.  Melodic phrases were virtually sung on the instruments and shaped with loving care. The artists’ mutual attentiveness highlighted the frequent responsorial episodes, and contrapuntal textures were clear, without gliding into academic dryness, but radiating the joy of music.”  Ury Eppstein, The Jerusalem Post.

“Myrna Herzog and David Shemer are both key figures and pioneers in Israel’s musical life, in particular on the early music scene. In this prestigious Bach recital, they struck a fine balance between personal- and joint expressiveness. The concert was, indeed, one of the highlights of the 2012-2013 concert season".
Pamela Hickman's Concert Critique Blog